First off- The Indie Craft Documentary got a shout out in the New York Time Magazine this last Sunday, July 2nd. The article written by Rob Walker is about the new wave of craft- you can read it online HERE although you may have to register (it's FREE). If you don't want to read the entire article, which you should, this is the part referring to the film-

"Still, the more popular crafting becomes, the more crafters see mass goods in mainstream retailers that mimic the handmade look. This is part of the reason that Faythe Levine, who runs Paper Boat Boutique and Gallery in Milwaukee and coordinates that city's Art vs. Craft fair, has begun filming a documentary that frames the contemporary craft movement as being partly descended from the indie-driven culture of zines and punk rock. Levine views the story of D.I.Y. crafting as one of building an alternative to mainstream consumption — not as a lifestyle trend. She also points out that this is an "art movement" that is dominated by female artist-entrepreneurs. "We're talking thousands of women," she says. "It's really impressive, and powerful.""

Now to finally catch up on talking about Art vs. Craft, Milwakuee- June 24th
Just a small recap of the day (a week later) with some photos of who we had time to interview and some other highlights. For those of you who don't already know Art vs. Craft just held it's fouth event, it is my personal craft fair that myself and my business partner Kim Kisiolek organize. We held this round at a new venue which was much more functional, but not a pretty as our old location.

A big thanks goes out to Drew Rosas who did sound for us for the day at the show. Yay Drew.

As to be expected it was fairly difficult for me to balance out running the show, having a booth and working on the movie but we did manage to get in interviews with the following peeps- 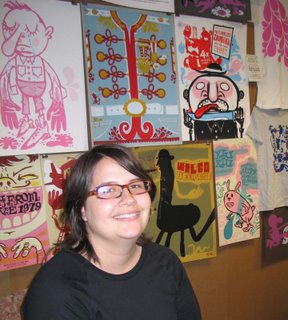 Melissa, one half of the little friends of printmaking (who do the poster design for the show) If you have never expierenced the design work of Melissa & JW- got to there site. It rules. 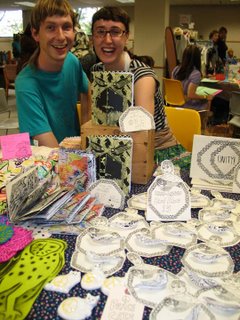 Luke & Sarah drove from Providence, RI to sell a smattering of lovely handmade music, pins and accesories under the monikers of Birds of Prey & Glaciers of nice. 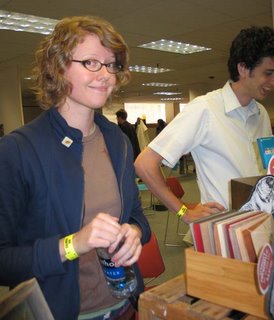 Tracy Bull & her husband Justin drove out from Rochester, NY. Tracy make fused glass badges, nightlights and more under the name of Happy Owl Glass. I am a super fan of Tracy's work. She also made an exclusive badge as a donation for the documentary etsy site which will go up by tomorrow! They are super rad! 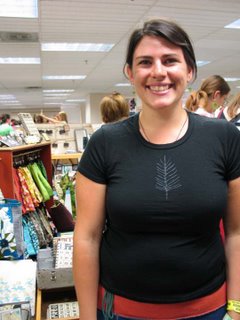 Carol Lynn of REcreate Designs came down from Madison, WI. she make a varity of well made clothing and accesories out of discarded items and she always has the best displays! 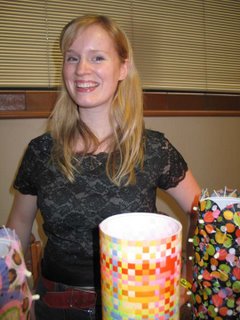 Heather and her boyfriend (husband?, sorry... I'm not sure) Donald drove a whopping 20+ hours to get to the show from Massachusettes to show off her amazingly great lamps made out of paper umbrella's and vintage ribbon. Check her work out at bright lights little city. 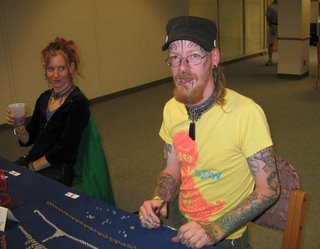 Bob & Allison of Hex Handcrafts, are local jewelry makers who work with a varity of metals to make chain mail. There table is always a hit and after the show I always see tons of folks around the city wearing their work. 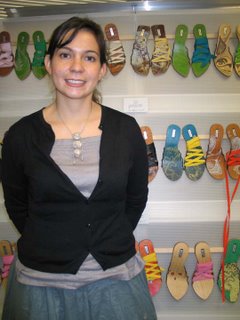 Annie is the first shoemaker I ever met, I asked her if I could call her a cobblerette, but I guess a cobbler is a shoe fixer, not shoe maker (I think I am getting that right). Her work is absolutly amazing and she is self taught after wanting to do something besides being an architect! She walked us through the process of how she makes her artisian shoes in-house in her studio in Chicago- check out the mohop line. We are hoping to do an in studio interview with her as well. 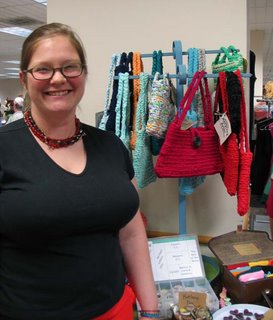 Emily is a crafty superstar and one of our best sellers at my shop. She works under the name of the "recyclying artist" EKRA. She makes all sorts of goodies from bottle cap magnets to rugs crocheted out of old clothing. All her work is bright bold and reconstructed from discared or unused items. You can buy work from Emily at the Madison Farmers market weekly.
Posted by Faythe Levine at 9:31 AM
Email ThisBlogThis!Share to TwitterShare to FacebookShare to Pinterest

Wow! Just found out about y'all, and must say I'm excited. I'm going to post a link to you on my blog. Keep up the good work!