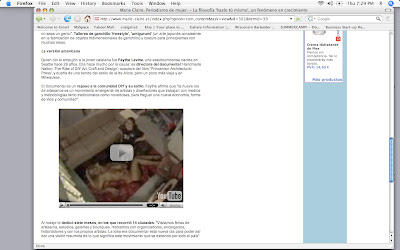 Last week Irene Serrano a writer from a spanish version of Marie Claire contacted me about an article she was working on about the DIY philosopy and she wanted to know if I would give her my opinion. Of course I said yes and the result went live today-- the cool thing about it is that I am featured in the same article as my friend Alicia who runs a shop in Barcelona called Dudua which is a gallery and boutique similar to my shop Paper Boat here in Milwaukee!! The internet makes the world so small-- above is a screen shot of our piece and HERE is a link to the article!
Posted by Faythe Levine at 7:43 PM 3 comments:
Email ThisBlogThis!Share to TwitterShare to FacebookShare to Pinterest

Just picked up the Fall issue of Adorn & found our fundraiser totes featured! Thanks Adorn! 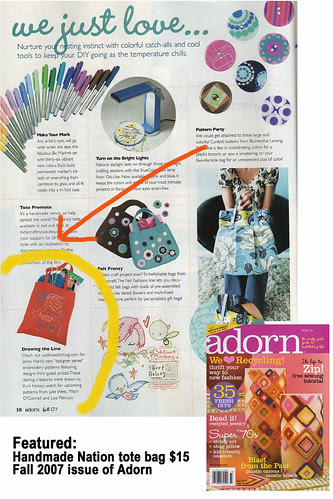 The new issue looks super rad, I haven't had a second to really look at it, but it is tempting me right now.....
Posted by Faythe Levine at 2:15 PM 1 comment:
Email ThisBlogThis!Share to TwitterShare to FacebookShare to Pinterest
Holy YES! We are nearing the end of phase 1 with editing (transcribing all the tapes, all 80 hours) I never realized how painful it would be to listen to myself talk that much. Let's just say it made me squirm. BUT this means we now get to the fun part of piecing the puzzle of the documentary together! Piece of cake, right?!

What Cris and I realized over the course of watching all the footage gathered from the last year, is that we needed to follow-up on a few things. And of course there was some stuff missing.

So gave up my space at Renegade Craft fair and instead of vending we will be shooting. Not just roaming around and talking to people shooting (although we will probably do some of that too), but following one lucky vendor for 24 hours. That's right, 24 hours with a crafter-- so the view can expierecne the amount of work that goes into participating in a show this scale. Our lucky lady is going to be the fantastic Ileana of India*Romeo.

FUN FACT: Ileana was actually the very first person we interviewed for the documentary in Atlanta, GA at ICE.

Micaela and I will also be making an unexpceted very quick trip to New York for the launch of the newly revamped American Craft Magazine (not to be confused with CRAFT: zine) and doing an interview with Andrew Wagner the new editor-in-chief (formerly of Dwell). Cris and I decided we need a little more imput from someone who is apart of the American Craft community and Mr. Wagner fits the bill! It just so happens that it times out perfectly to catch the last of the Summer in the City Salon Series at the American Craft Council Library. The last segment is on Blogging the Handmade: Creating Community, Conversation & Commerce. Brooklyn gallery owners Amy Shaw (Greenjeans) and Rena Tom (Rare Device) speak about their blogs and how they’re linking craft and design lovers to build communities smitten with unique handmade objects. 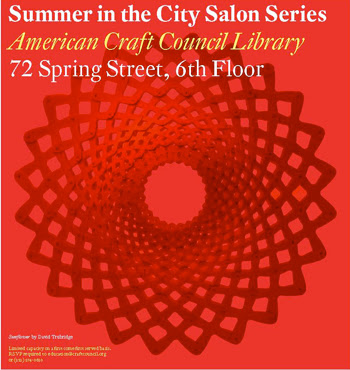 And we will not leave NY a second time without paying homage to the ETSY Labs! We are also going to try to get Rob Kalin (the man behind the concept and software) on camera for an interview to get his two cents about the DIY community and the quick growth of ETSY.

Some of you may know that I have been finalizing a book deal with Princeton Architectural Press (I think that's the first time I've officially printed their name on the blog!!). The book with be a companion to the documentary featuring makers from around the country including parts of their interviews from our footage and lots of pictures and essays from community members (I'm so flippin excited!). More on that soon along with an introduction to Cortney Heimerl who will be the co-author!

That made me think, maybe we should do a Q&A for Cortney, Micaela (our camera-lady) & Cris (the editor)? Thoughts?

Please don't forget- I posted new donation up in the ETSY shop and the blue totes are restocked for those of you who have been emailing!

FUN FACT: My brick & mortar shop is featured in the September issue of Spin Magazine in an article about Milwaukee! Page 146!
Posted by Faythe Levine at 8:49 AM 3 comments:
Email ThisBlogThis!Share to TwitterShare to FacebookShare to Pinterest

On my way to Cris' house to edit this morning before I open Paper Boat at noon-- Just emailed this to Sue and Kathleen for the Renagade Craft Fair Booklet-- a few days late, but hopefully it's okay, I totally spaced it until late last night.

Posted by Faythe Levine at 8:54 AM 4 comments:
Email ThisBlogThis!Share to TwitterShare to FacebookShare to Pinterest

Since we are in super boring editing mode and there isn't much to share about the film right now I am going to make an effort to post stuff that I think is important for our community...

#1 Leaders of the DIY Movement Speak at American Craft Counsil Salon
Everyone should go and read this blog, it's fantastic.


#2 I'm sure a lot of you are familiar with the amazing show that happens once a year in Chicago called the DIY Trunk Show- if not, well you should check out their site. I especially like their
Craftifesto......

The DIY Trunk Show Craftifesto: The Power is in Your Hands!

The DIY Trunk Show is an annual event that brings the best of the Chicago area's alternative craft community to the people.

Craft is powerful. We want to show the depth and breadth of the Chicago crafting community. Anything you want—clothing, jewelry, art, music—you can probably get from a real live person here in Chicago. And buying handmade, one-of-a-kind goods from your neighbor kicks the ass of buying mass-produced, slave-made corporate stuff.

Craft is personal. To know that something was made by hand, by someone who cares that you like it, makes that object much more enjoyable. And it makes you feel less lonely when you realize that you know the name of the person who made the bar of soap you use, the earrings you wore when you met that special someone, or the scarf that kept you from freezing while you waited for the train.

Craft is political. We're not just trying to sell stuff. We're trying to change the world. We want everyone to rethink corporate culture and consumerism.

Craft is possible. Everybody can create something—you don't have to be an established business to make stuff. The DIY Trunk Show encourages new crafters by giving them a place to sell their work for the first time. We hold workshops to teach people how to make things. And we're creating friendships and connections between crafters‹being a small business owner doesn't mean you have to work in isolation.
Posted by Faythe Levine at 10:26 PM 2 comments:
Email ThisBlogThis!Share to TwitterShare to FacebookShare to Pinterest

I am going to be back in blog-land soon. At Cris's house editing as I type and just wanted to let you know we have new donations up in the etsy shop including a generous donations from the above Sublime Stitching. 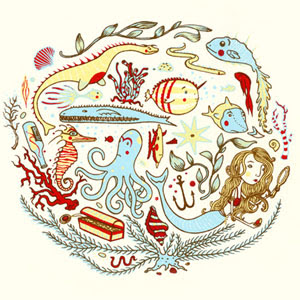 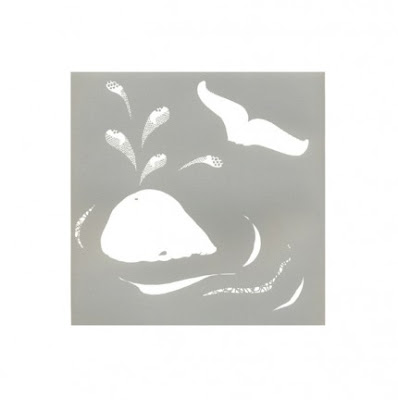 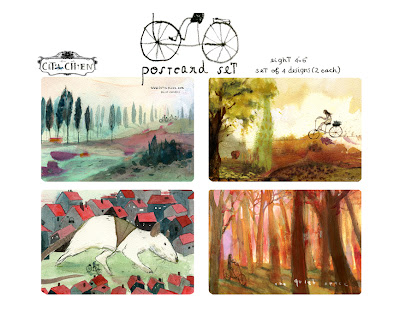 Postcard sets from Catia Chen
More donations going live by the end of the week, I swear! Plus our t-shirt sale is still going on, blue totes will be back next week and more to be announced soon!
Posted by Faythe Levine at 5:24 PM 1 comment:
Email ThisBlogThis!Share to TwitterShare to FacebookShare to Pinterest
Newer Posts Older Posts Home
Subscribe to: Posts (Atom)