New York in the summer is always an intense experience for me. The overwhelming amount of people, not knowing my way around, the HEAT, the trash, the walking blocks and blocks…. our trip was a super success and I would like to thank everyone who gave us directions and guided us around the city. I would also like to say a special thanks to Keeva & Nick who gave us a room to sleep in, Sarah Price for her time, guidance, equipment loaning and the rooftop of my dreams, Sue & Kathleen the organizers of the Renegade Craft Fair for letting their vendors know we would be shooting at the event as well as everyone who showed interest in the project, let us film their work and spoke with us on camera.

We were sad that we didn’t get to follow up with as many peeps as we had planned at the show. The immense size of Renegade, the heat, our pesky allergies all limited our time. But, there are more shows to come and hopefully we can catch up with you all soon!!

ALSO, thanks to everyone who donated their work for our etsy.com shop to help raise money for the film. We will be updating the store in the next few days. Those of you who are interested in donating, the information and forms are available on the site under the “support” section (just scroll down to the end).

So, this is what we did on our trip to the big city of New York-

Thursday, June 15th
Micaela & I flew out of Milwaukee late Thursday night and arrived at La Guardia all in one piece. We strolled around the East Village, got a drink and a slice and hit the hay to be all rested for our day of interviews on Friday.

Friday, June 16th
By 11:00 we made our way to Green Point where we met up with Erin Weckerle, the owner of Sodafine. 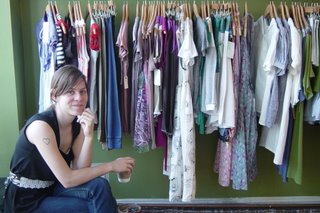 Our first NYC interview Erin of Sodafine
I had met Erin last summer when I was out for Renegade and was looking forward to catching up and talking with her about her ever growing store and the near future plans of relocating Sodafine to Williamsburg. 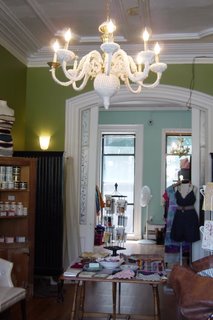 Inside view of the shop (check out the chandelier)

We did a great interview, drooled over her exceptional clothing selection, marveled at the chandelier that Erin had crocheted around and had to mosey along to our next appointment. 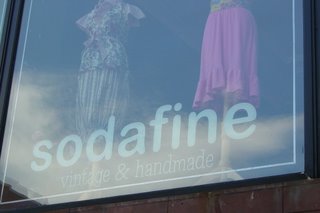 Sodafine will be at it's current location through June at 246 Dekalb Ave,, Brooklyn, NY

Cog & Pearl was our next scheduled stop. I was super excited to see this shop that so many designers rave about working with. We were lucky enough to get both owners in the house for an interview- married couple Seth Walter and Kristin Overson. 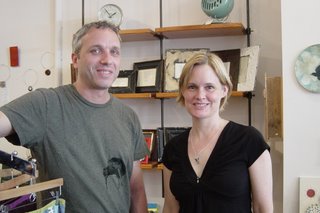 We talked about Cog & Pearl approaching its 4th birthday, the overall aesthetic of the shop and there hopes for both of them working exclusively at the shop becoming more and more of a reality. Cog & Pearl had a lot of work I was familiar with but also a dreamy selection of ceramics, 3-D art and house wears that all fit into the space in the best way. They also make an extreme effort to display the names of the artists next to their work, which I though was rad. 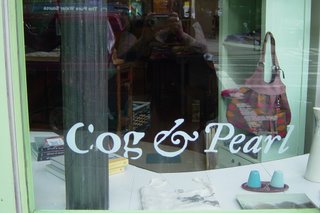 Exterior of Cog & Pearl 190 Fifth Ave., Brooklyn, NY
Next we zipped over to SoHo and met up with the fabulous ladies of Adorn Magazine, Christina Batch, Editor and Linda Permann, Craft Editor. 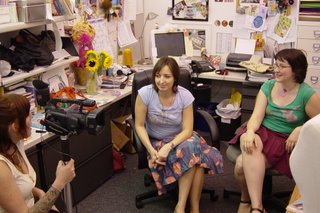 I had been in touch with them since they are sponsoring Art vs. Craft(my craft fair I organize in Milwaukee) and thought it would be good to get their views on the d.i.y. craft community. SoHo publishes magazines such as Knit 1 and Vogue Knitting and Adorn Magazine debuts this June. It is a great print magazine that explores products, projects, style and interviews all craft related and aimed at the “younger hip” craft community. I think there first issue looks fabu and it includes an article by Trisha Royal, one of my personal favorite people I’ve discovered online. We talked a lot about what they are trying to do with the magazine and how it can help the d.i.y. craft community. They will be offering ad opportunities for indie businesses; you can submit your ideas, all sort of rad stuff. I fully endorse what they are tying to do. I was also suprised to find out that there was only a very tiny staff making it happen!! We kept them both in the office late on a Friday evening and we finally wrapped things up when the last person left and we had to find the light switches on the way out! 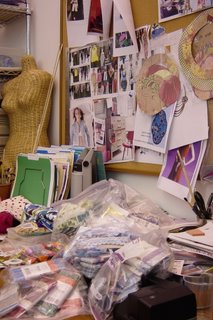 This is where all the crafty magic happens for the layout of Adorn!
That was a wrap for Friday!! More on who we talked with, including Sarah from the Small Object, Leah Kramer from Craftster.org and the ladies of the Austin Craft Mafia, and saw at the Renegade Craft Fair later today or tomorrow!
Posted by Faythe Levine at 1:14 PM
Email ThisBlogThis!Share to TwitterShare to FacebookShare to Pinterest